Athlon was a family of high-performance 32-bit microprocessors developed by AMD based on AMD's K7 microarchitecture. Athlon was introduced on June 23, 1999. 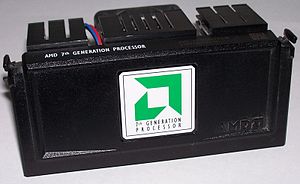 Original Athlon Processor, Argon core, in a cartridge with a heat sink.

Early Athlon microprocessors were packaged with a separate L2$ into a single cartridge. The cartridge connected into AMD's Slot A (similar to Intel's Slot 1). Those processors included Argon, Pluto, and Orion-core based processors. Later microprocessors (starting with Thunderbird core-based) introduced on-die L2$ simplifying the packing complexity, allowing it to use a standard PGA (Socket A).

The Argon, released in 1999, uses Slot A, has a double data rate front side bus operating at 100 MHz (having an effective bus speed of 200 MHz). Argon microprocessors were manufactured in 250 nm process.

Thunderbird-based microprocessors were manufactured in both cartridge form (Slot A) and as PGA (Socket A).