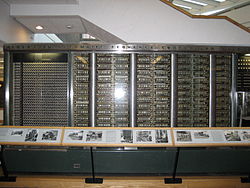 The Harvard Mark I, a relay-based computer, one of the earliest, made by Howard Aiken with the help of IBM in 1944.

A relay computer is a computer system built primarily using electromechanical relays and relay logic. Obsoleting most of the earlier mechanical computers, relay were a short-lived technology during the late 1930s to early 1950s. By the late 1950s technology has shifted almost exclusively to vacuum tubes. From the mid 1950s onward, vacuum tube computers superseded relay logic.

The idea of using relays to realize logic circuits was not new even in the 1920s. However it was not until the late 1930s that actual full-scale computers and calculators were developed. It was not until the end of World War II that a large number of systems were built.

The choice of using relays instead of vacuum tube boiled down to cost and availability. Standard telephone relays were already in wide use and were considerably cheaper than any other alternative, albeit slow and power hungry. Since most of the early relay computers were developed by independent individuals such as George Stibitz and Konrad Zuse and without a large budget, using relays made the most sense.

Retrieved from "https://en.wikichip.org/w/index.php?title=relay_computer&oldid=98608"
Category:
Hidden category:
This page was last modified on 9 March 2021, at 06:45.