In 1980 BBC started the Computer Literacy Project. At the time BBC wanted the project to center around a microcomputer. BBC entered talks with a number of computer companies, among them was Acorn Computers. Early in 1980 Acorn released the Acorn Atom and by that time they were already working on their next project, Proton. Acorn got an early prototype working to demo BBC. The Proton met BBC's specification resulting in a contract signed in February of 1981. In December of 1981 Acorn Computers introduced the BBC Micro, becoming a great success.

The Acorn BBC Micro made use of the 6502, a highly popular 8-bit microprocessor operating at 2 MHz. The early 80s were transforming quickly and by January 1983 Apple introduced the Apple Lisa which utilized the Motorola 68000, a much more powerful 16-bit microprocessor operating at 5 MHz. The Lisa included many other cutting edge features such as a windowing environment. 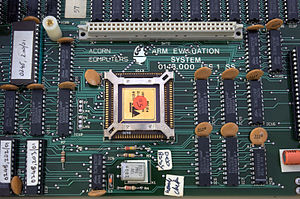 ARM1 Evaluation System board. The microprocessor in the center is the VC2588.

Recognizing the need for more powerful computers, Acorn formed the Advanced Research and Development division. In 1983 the group was established in an attempt to develop a their own RISC processor. The initial outcome of the project was the first ARM processor. Initially stood for Acorn RISC Machine, the name was later changed to Advanced RISC Machine.

The ARM1 had a few major bottlenecks - primarily the lack of hardware multiplication support resulted in considerable performance issues in related code. The problem was compounded by the fact that the ARM1 had no ability to support coprocessors which were needed for scientific applications that could make use of a powerful FPU coprocessor. By the following year Acorn reimplemented the ARM1 on a smaller process along with a number of enhancements designed to address those precise problems. The new design became the ARM2.

In under a year following the initial ARM prototypes, Acorn introduced the ARM2. The ARM2 was a introduced coprocessor support and eliminated the need for the slow software multiplication by introducing hardware support. Fabricated by VTI on a smaller process, the result was faster, less power consuming, and smaller processor. Acorn's first commercial microprocessor became a commercial success.

By 1989, Acorn introduced the ARM3. Serving as a successor to the ARM2, the ARM3 introduced pretty substantial performance improvements through a process shrink and the introduction of on-die cache. Thanks to those improvements, the processor was now capable of running at higher frequency while still supporting cheaper, and thus slower, commodity DRAM chips.

In November 1990 Advanced RISC Machines Ltd was founded in a partnership with Apple Computer, Inc. and VLSI Technology with Acorn Computers. The new company was established with the primary goal of further developing the ARM microprocessors. In 1993, in addition to VLSI, both Sharp and GEC-Plessey Semiconductor (GPS) became licensees of ARM.

Apple's interest in the processor was for their Newton PDAs. In the early stages of the project, when Apple was evaluating the possible processors they realized they needed a 486-class performance. When they evaluated the Acorn ARM3 it met the performance and power characteristics but was not a perfect fit. Apple's biggest criticism was its lack of integrated Memory Management Unit (MMU). At the time, Acorn Computers simply didn't have the resources to develop one. The formation of ARM Ltd. allowed for an injection of funding sufficient to address those issues and keep the ARM architecture up-to-date and competitive.

Developed by the then-new ARM company, the ARM6 fixed most of Apple's criticism by introducing a new memory management unit (MMU) with virtual memory support as well as a JTAG boundary scan interface. The ARM6 also extended the previous architecture which had a 26-bit address bus to 32-bit, allowing a larger address space to be accessible by introducing separate status registers. This was all done while still providing a backwards compatibility mode for older 26-bit programs.