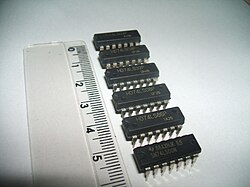 A series of various 74LS chips.

7400 series is an extended family of digital integrated circuits. Chips in this series include a variety of discrete logic chips chips such as and gates and or gates as well as registers, decoders, and RAM units.

Some of more popular ones you'll encounter are:

None - When no indicator is found, this implies it's the original TTL
Bipolar 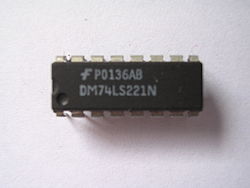